Golfweek recently released their annual Ultimate Guide to Golf Course Living and Great Escapes for 2015.  Myrtle Beach had three courses to be ranked in the top 100 and a few just outside of the .... Read More

Even though there is still nice weather remaining to enjoy Myrtle Beach golf this year, the fall golf season is winding down.  The leaves have begun to fall, temperatures are gradually cooling .... Read More

Beachwood Golf Club in North Myrtle Beach has long been one of the favorite Myrtle Beach golf courses for visitors and locals alike.  Beachwood opened in 1968 and was designed by famed golf .... Read More

Myrtle Beach is known as “The Seaside Golf Capital of the World” and with that title it has nearly 100 great courses, but everyone wants to know which, are the best golf courses in Myrtle .... Read More

Check Out These Drivers in Myrtle Beach Golf Stores

Every golfer likes the feeling of hitting a good drive.  It starts your day on the links in a positive manner that can transfer to the rest of your game.  As equipment keeps evolving, it is .... Read More

Different Games to Try on Your Next Myrtle Beach Golf Trip

Golfers as a whole have always enjoyed playing for a little something.  The next time you are here on a Myrtle Beach golf trip try some of these different games on any of our beautiful Myrtle .... Read More

Owners of Heron Point Golf Club plan to close the club on December 14, 2014.  The club has been struggling to break even financially and was in bad need of some capital .... Read More

A group of golfers from Pennsylvania returned to the Grand Strand for its 45th straight year this week.  Ron Bingeman, Everett Cassel, and Larry Spangler having been making their annual .... Read More

Tidewater has Reopened with NEW Greens & other Improvements

Tidewater Golf Club and Plantation recently reopened after completing many restorations and improvements to the course.  Tidewater closed its course on June 8 to begin these changes. One .... Read More

The 6,913-yard par 72 Wicked Stick Golf Links opened in 1995 could be closing soon.  The course was designed by Clyde Johnson with consulting input from two-time major winner John .... Read More

When visiting Myrtle Beach on your next golf trip you might want to experience something different.  Check out the beautiful Brookgreen Gardens. LOCATION / On U.S. 17, between Murrells .... Read More

In 2013 a Chinese businessman who is known as Mr. Pan and is described as a successful industrialist with varied interest, including several real estate holdings primarily in China, purchased the .... Read More

Myrtle Beach is home to over 90 golf courses and is known as the “Seaside Golf Capital of the World”.  The history of Myrtle Beach golf goes back to 1927 when Pine Lakes Country .... Read More

Recently the 25th playing of Law Enforcement Appreciation Day was hosted by Eagle Nest Golf Club in Little River. The tradition of this tournament began when Troy Hardee helped start this .... Read More

Smunk To Be Inducted Into The Hall Of Fame

Bill Smunk of Kingstree, S.C. has been chosen to be inducted into the South Carolina Golf Hall of Fame.  For a half of a century, Smunk has been a prominent fixture on leaderboards throughout .... Read More 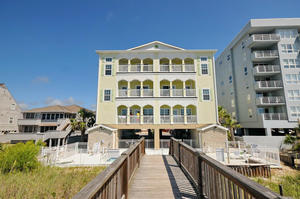 Prices Start at $239 per person